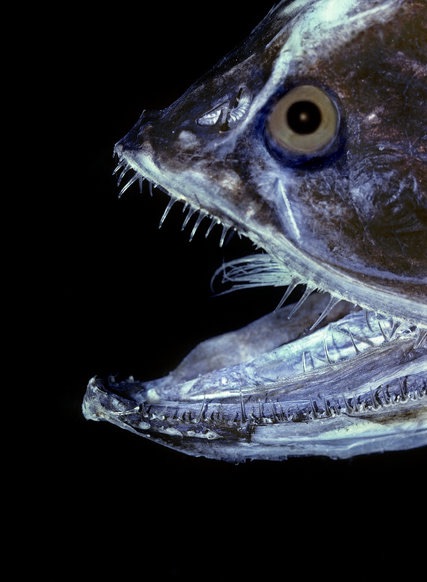 While land habitat makes up less than 1 percent of our biosphere, scientists put the ocean’s share at more than 99 percent. So it’s no surprise that new findings put the tiny bristlemouth, a fish living at the middle depths which glows in the dark and has needle-like fangs, as the most numerous vertebrate on earth.

“They’re everywhere, ” Bruce H. Robinson, a senior marine biologist at the Monterey Bay Aquarium Research Institute in California, said of the bony little fish. “Everyone agrees. It’s the most abundant on the planet.”

Where chickens are thought to be the land based dominate vertebrate, at around 24 billion, ichthyologists put the likely figure for bristlemouths at “hundreds of trillions, perhaps even quadrillions.”

The bristlemouth also thrives as a protandrous species, that is, a male-first hermaphrodite. Though because they occupy a hard to access environment, there is still little understood about their behaviour.

Scientists agree that if the tortuous route to identifying this dominant species is any indication, the global ocean may likely harbour a million more species unknown to science.

“At least a million,” Dr. Robinson says. “That’s because there’s so many places we haven’t looked.”

“The bristlemouth poses a deeply fascinating organism whose role in the food webs of the deep sea could not be overstated. Its growing appreciation also traces back the history of modern marine biology since the 19th century, when its abundance was first noted during the expedition of HMS Challenger.”

For a look at this wildly successful predator, and more about what we know about it so far, see full article.

« OSE has the loveliest editors.
Returning plastic to oil »